RETURN OF THE RED TAILS COMMITTEE: The many details of the event including fund raising, bus, cars, hotels, for over 20 guests requires 6 months of planning by a team of more than 10 people. Dozens of volunteers

FAITHFUL PURSUIT ROAD CREW: As we traveled the country, from NY state to Florida on the east coast and headed west to Detroit, Nevada and Phoenix the crew was on hand to keep the car in show condition.

FAITHFUL PURSUIT FABRICATION TEAM: Long months of preparation went into the fabrication of a dream more than two decades in the making.  Benjamin, Blair, Martin, Rosemary, and wife Deborah are key supporters of our program. Ten years after this photo was taken they have grown into capable young adults.

Faithful Pursuit and Col. Harry Stewart's 1949 Gunnery Meet anniversary trophy. Michael Joseph, II; Tuskegee Airmen, Inc.; Nevada, 2009. I had served as the chairman of the event honoring the winners of the first USAF Fighter Gunnery Meet; held in Las Vegas in August 2009. Col. Stewart was not able to attend due to his wife's poor health so I delivered his trophy to him personally to his home in Michigan a few days after this photo was taken.

FP #47 and Michael Drag Racing at Empire Dragway in Mt. Morris, NY. The 2006 revision featured a 4.11 to 1 positive traction gear ratio, 30"x12" slicks and the torquey Buick 455 STAGE-1 power-plant bored out to 462 cubic inches and delivering 500HP. A best of 12.99 seconds at 103mph trap speeds was achieved with this configuration. Future targets of beating the Scotty Guadagno '70 Buick Electra record of 11.7seconds at 117 mph were in my sights but more than 700hp would be needed. The new revision of FP will be ready in 2016 to tackle the challenge!

2005 Faithful Pursuit on display at the Corning Museum of Glass in Corning, NY. Retired Corning division president Jim Kaeser was given a tour of the vehicle during a "CMOG" gala. 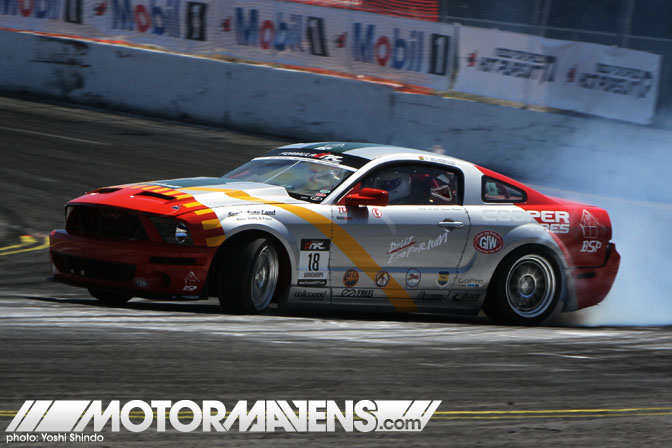 2008 MUSTANG REV A, TAI NY Chapter/TOP COVER RACING: Owned by Tony Brakohiapa and developed as a rolling representation of the Tuskegee Airmen's famed Red Tail P-51 fighter, the Ford Mustang car was used to compete professionally in Formula Drift across the us. The brainchild of Captain Waymon Watson, US Navy, retired; son of Tuskegee Airman Span Watson, pictured above with Faithful Pursuit; this Mustang has been the international representative of the Tuskegee Airmen. Waymon's "Top Cover Racing" organization was developed to encapsulate Tuskegee Airmen race car activities. Tony Brakohiapa owned and drove this car.

MUSTANG REV C TAI CHAPTER/TOP COVER RACING. This was a purpose built Ford road racecar specially painted to represent the Tuskegee Airmen and was owned by Mark Ackley in the Southern Tier in upstate NY. It was displayed at the Tuskegee Airmen, Inc. National Convention in National Harbor, MD in 2012 as well as the 11-11-11 Veteran's Day Parade on a TAI Chapter Float in NYC. 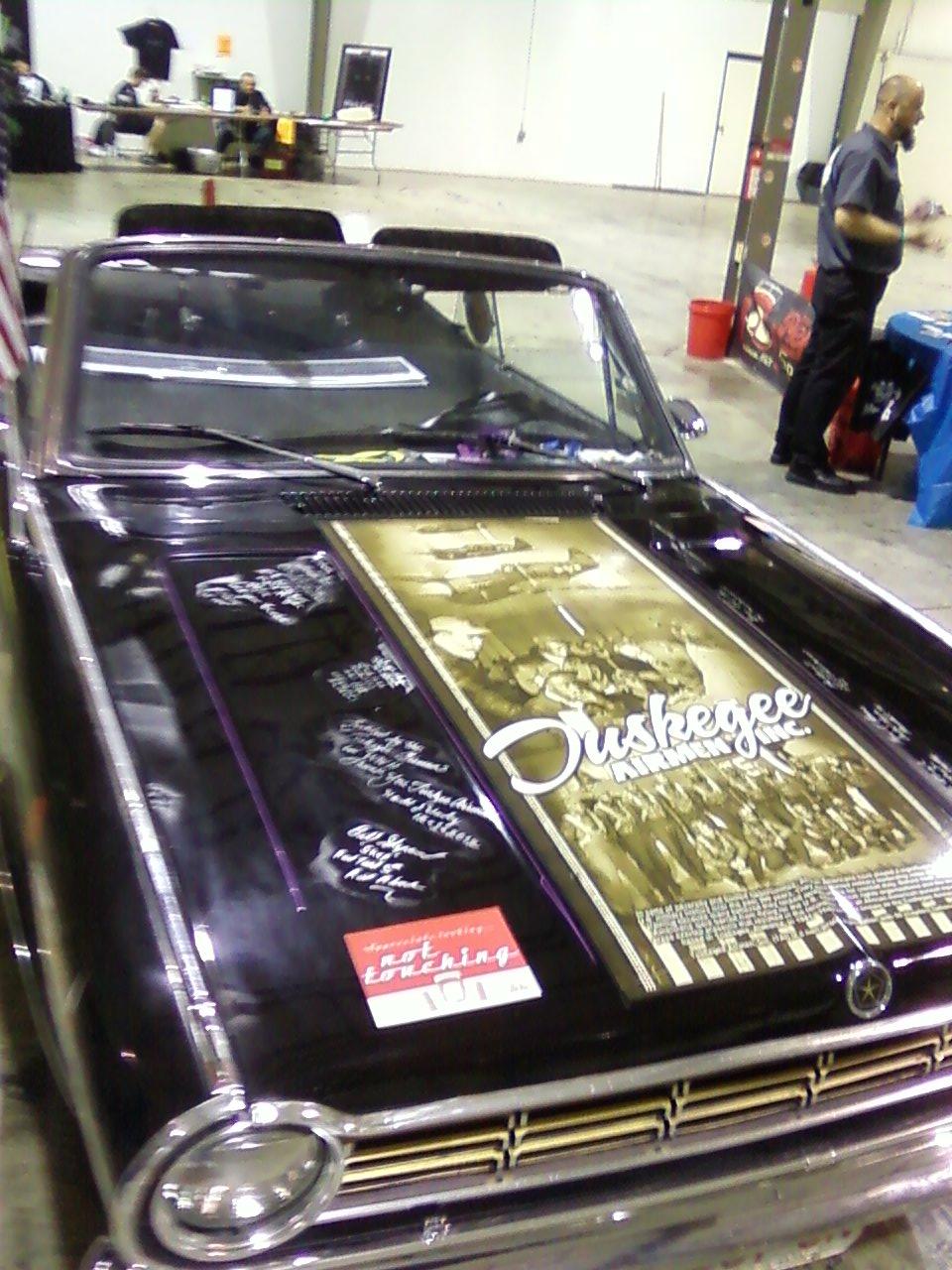 1964 Plymouth Valiant, TAI Dayton Chapter: The convertible parade car offers a brilliant display of the signatures as well a striking image of the men who served during WW II.

Similar to the TAI NY Chapter/TOP COVER RACING designs; this MUSTANG was developed by FORD MOTOR CO some time after our design was shared with them. It is a fine tribute to the Tuskegee Airmen and the P-51 Red Tail fighter. The P-51C was originally restored by Don Hinz. The Red Tail on the right is the same aircraft pictured with Michael Joseph at Tuskegee in 2000. Don Hinz was killed tragically in 2004 when engine failure in that same aircraft caused a a fatal low altitude loss of power. The beautiful aircraft was painstakingly restored by the CAF and tours the country today.

My major inspiration for developing the FP in the 1970's was the P-47 Thunderbolt, which was actually the first Red Tail aircraft the Tuskegee Airmen used. The old Jugs are rarer than the Mustangs although they were built in greater quantities than any other fighting aircraft back in war time.  TAI members Michael Joseph and Roy Ely at Tuskegee with the only two Red Tail fighters in existence at that time, P-51c models. No Red Tail P-47s exist but prints can be acquired through this site.

2000 Michael pictured with Tuskegee Airman Roy Ely at a TAI National Convention event in Tuskegee Alabama. The special homecoming event was part of that years Atlanta based convention hosted by the Atlanta Chapter of TAI.

2014, I rented the Don Hinz P-51 for our Return of the Red Tails event. We wanted it for the original dedication of the FP in 2004 but it was too costly for the two days of transport for a one day showing. Sadly, a few months after our spring 2004 dedication Don Hinz was killed in the aircraft. After years of dedicated work by CAF and the aircraft being located in Canada, the FP fund raiser could now afford to rent the aircraft as a proper tribute to the men and women of the Tuskegee Airmen. Hundreds if not thousands of local area residents saw her fly over the region and the event that day.

In spite of adversity and limited opportunities, African Americans have played a significant role in U.S. military history over the past 300 years. They were denied military leadership roles and skilled training because many believed they lacked qualifications for combat duty. Before 1940, African Americans were barred from flying for the U.S. military. Civil rights organizations and the black press exerted pressure that resulted in the formation of an all African-American pursuit squadron based in Tuskegee, Alabama, in 1941. They became known as the Tuskegee Airmen.

"Tuskegee Airmen" refers to all who were involved in the so-called "Tuskegee Experiment," the Army Air Corps program to train African Americans to fly and maintain combat aircraft. The Tuskegee Airmen included pilots, navigators, bombardiers, maintenance and support staff, instructors, and all the personnel who kept the planes in the air.

The military selected Tuskegee Institute to train pilots because of its commitment to aeronautical training. Tuskegee had the facilities, and engineering and technical instructors, as well as a climate for year round flying. The first Civilian Pilot Training Program students completed their instruction in May 1940. The Tuskegee program was then expanded and became the center for African-American aviation during World War II.

The Tuskegee Airmen overcame segregation and prejudice to become one of the most highly respected fighter groups of World War II. They proved conclusively that African Americans could fly and maintain sophisticated combat aircraft. The Tuskegee Airmen's achievements, together with the men and women who supported them, paved the way for full integration of the U.S. military.

upon the occasion of the pinning of his fourth star by president Bill Clinton.

© 2015 Return Of The Redtails. All Rights Reserved. Developed by Anything Anymated.

template joomla
Back to top